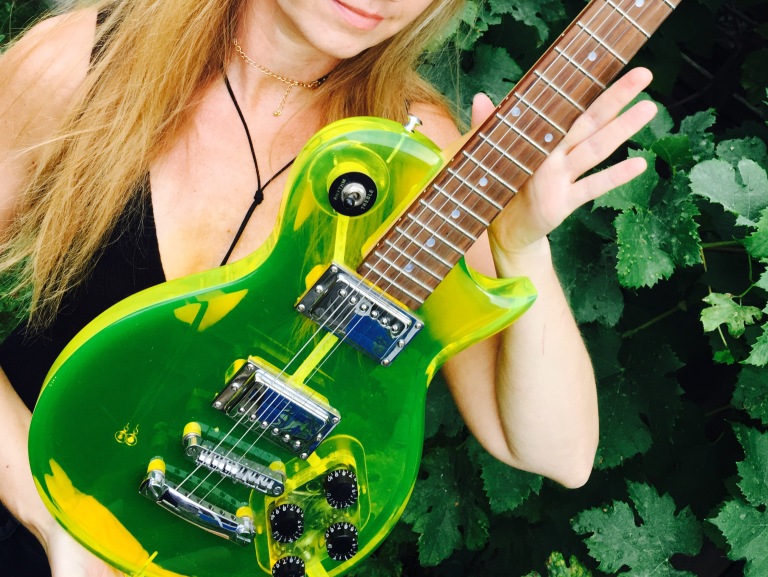 A new guitar is as exciting as a new baby, or a new lover, but with none of the mess. 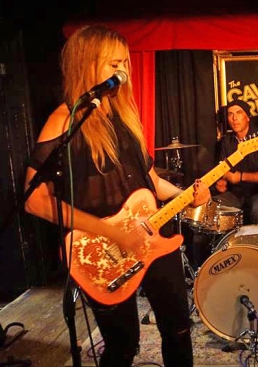 When I was 17 I walked past the window of the only Music Shop in Ipswich and fell in love with a pink paisley Fender Telecaster guitar. I begged and begged my dad to buy it for my 18th birthday. Friends were getting practical presents like cars, tractors, horses, holidays and bikes (this was pre-computers). Only today my 82yr old mum was telling me how my dad didn’t want me to have a guitar – he was finally swayed by a stranger he chatted to on a train who was extolling the benefits of music for youngsters. I wish I could thank that man, because if it wasn’t for him I might be doing embroidery in my evenings now instead of rock. When I got that guitar home, I mainly stroked it, I had no idea where to put my hands. I have a video of me “trying on” a bandmate’s guitar when I was about 16, and I slung it over one shoulder like a handbag, no clue. When I went off to Uni, my family emigrated but the pink curvy Telecaster came with me and we remain very very close. I often sleep with my guitars.

Last week I got very excited about a particular 2nd hand Jaguar Bass I was going to buy, I told all my local muso friends about it. When I was about to collect it, the seller contacted me and told me I’d been gazumped. It was fishy.  I was gutted, I’d been after this ‘discontinued” rarity for 2yrs. The next day I saw a really silly transparent yellow guitar for sale , and I was feeling “on-the-rebound”,  so I went out today and bought it. Some things are meant to be.

A trip into deepest darkest Kent had me winding up what felt like a mountainside to a small estate of houses. A nice man greeted me, he had a huge tropical fish tank, a swimming pool and a wealth of beautiful guitars, he let me touch some of them. It was like a muso’s equivalent of the Playboy Mansion.  The transparent guitar was still dusty from his attic. I knew it was going to be heavy, the Lucite material it is made of is nothing like the acrylic of today.  He joked that you could probably kill someone with one blow of it, which felt like a good USP.   It’s not a practical or particularly comfortable guitar, but nor is say, a pair of posh stilettos costing the same price. I usually haggle and drive a hard bargain (a market trader once likened me to Maggie Thatcher) but the seller was so nice I handed over my cash and put Mr. Lemony Snickets in the boot. 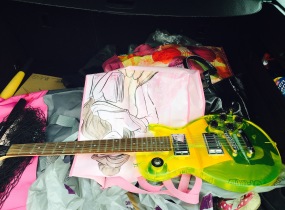 (Probably a bit weird if I start naming my guitars). Also, guitars don’t give you bunions. If all else fails, it will look good on the wall.

It’s so fascinating to be able to peer into the body of a transparent guitar. I mentioned in a previous blogpost how I took my dad’s radio apart (to his horror) when I was a toddler just to “see what was inside”. One day I’d love to be able to build a guitar, I built a camera last week (not working perfectly yet!) and I made a lyre once with one daughter, and panpipes (from plastic tubes) with the other. I have a crazy idea for a guitar design in my head,… one day perhaps… 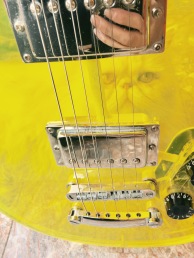 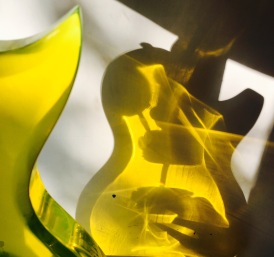 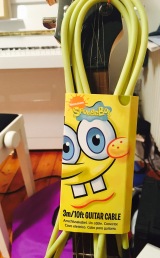 So now I have my transparent Wesley guitar home, I’ve been polishing it and staring at my cat through it, I’ve been shining light through it and thinking about fitting it with UV lights!  It sounds pretty good for something that looks like a toy and feels like a tank.  Every new instrument I handle is the start of a new song. I still don’t know where songs come from, not from inside the guitar, surely, but somehow they must. Your fingers just do the walking. 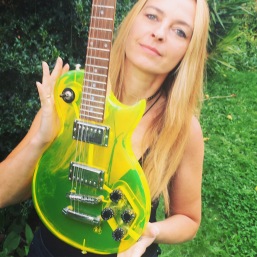 P.S. Come and see us play at the Birds Nest, Deptford this Friday 25th August 7.30pm, you’ll be safe because I’ll be on bass. 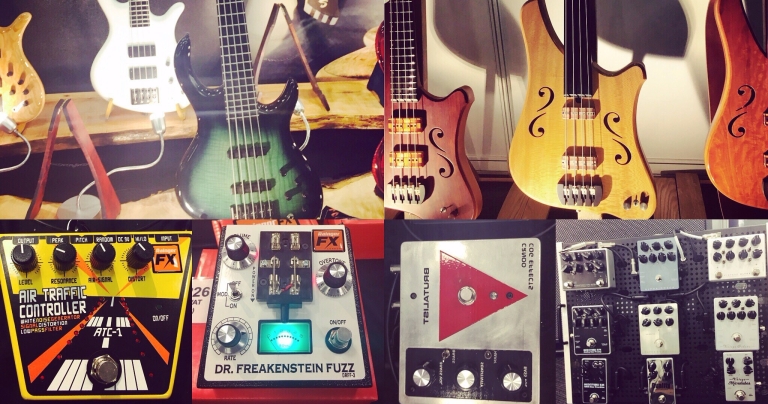 I had a flying visit to the Bass Show on Sunday 5th March. Due to the shitty London transport system it involved Rail Replacement buses between hailstorms. I hurried past the entrance marked “Bridal Show” at Olympia and straight into the next entrance, demanding a ticket for the talk by Andy Rourke (The Smiths’ bassist). The ladies at the desk waved me in looking rather frightened, I then realised I was entering the Knitting and Sewing Show! I soon spotted a herd of bassists (lanky leather-clad people with either abundant hair, or none of it) and followed them to the 3rd floor. 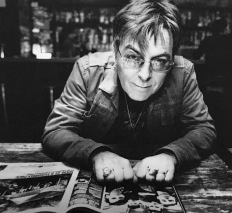 Andy Rourke spoke with Manchunian dryness about his days with The Smiths. His early influences include Mick Karn and various funk players, which explains why he came up with those flambouyant basslines that intercut with  Johnny Marr’s guitar riffs to produce that trademark Smiths sound. I’ve tried playing Smiths covers on the bass in the past, and they are the only songs I can’t manage to sing lead on at the same time (Japan is tricky too!).  It turns out that Rourke’s secret was the F# tuning he used – I just tried it and it makes those bass riffs a whole lot more achievable! It also helps explain why those basslines sound like they have been sucking helium balloons, or taking speed. In fact another thing Rourke revealed was that they speeded up all their songs in the hope that they could “get onto Top of The Pops”.

Coincidentally, I’d been reviewing some of our Zara band clips on You Tube. 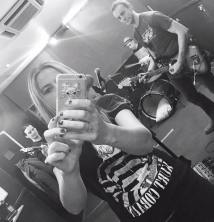 I’d come to the conclusion that we were playing a lot of the songs too slow. Sometimes, with stage nerves, we start a song over-cautiously, it then naturally picks up pace. Time actually feels slower on stage with all that adrenalin. A song tempo can be satisfactory on a recorded demo, but everyone’s energy gets boosted if you play it a little faster live. I feel it in the room. At rehearsal today I tried to ‘up’ the tempo on everything. I’m not sure if it was the energy drinks and flapjacks we consumed, but it all came to life.

I went through the same process when writing the 4 songs for the EP, I would gradually nudge up each draft by 1 BPM until it hit pop-breaking point. 1 beat per minute makes a huge difference, it never ceases to amaze me.

I’ve been going to the Bass Show for several years and I love being able to test out the new equipment on display. The first time I went, there were hardly any women present, and people on the stalls assumed I was a marketing person, not a bassist like everyone else. Thankfully that has now changed, there are several females bassists. 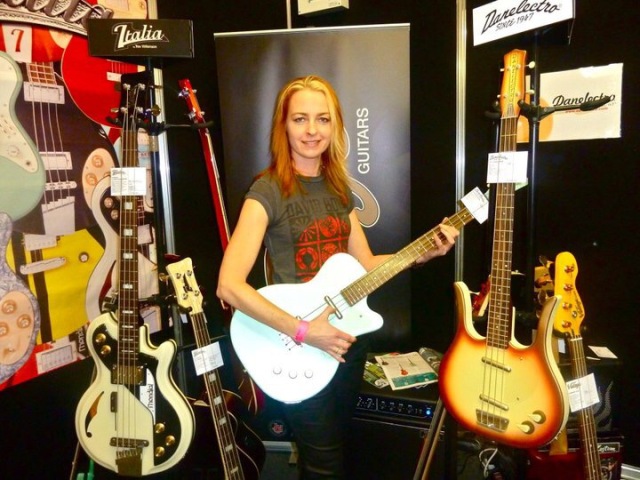 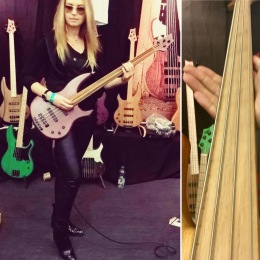 I was passing a stall of basses hand-made by Oliver Lang, he invited me to try one. I wouldn’t usually go for any bass that looks remotely like a tree (I don’t want a bass to sound natural like a tree, so I wouldn’t expect it to look like one!) But he handed me a fretless that felt nothing like I’d ever played before. The feel of the neck (a smooth sanded wood, warm to the touch) made it effortless, the notes came like they were in a liquid. Playing it was very much like singing. I have a Squier fretless bass but it has an glossy Ebonol (synthetic ebony) fingerboard which is whole different experience.

With places like Denmark Street (London’s home of guitar shops) under threat, it’s very important to have somewhere where you can feel and hear instruments, amps, and accessories in the flesh. A lot of gear in the 2nd hand market has been bought on-line and disappoints. 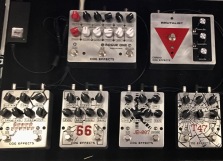 Another discovery I made was Cog Effects. I tried some amazing pedals on this stall. My favourite was the Grand Tarkin Bass Fuzz Pedal, which gave a huge thick wedge of fuzz that drowned out a poor guy slapping some bass beside me. ‘Slapping da bass’ is very rarely seen on stage these days, but it is alive and kicking at Bass Shows! Why? Well I suppose its a “show-off” skill, and it cuts through the din. I confess that if I am testing a bass I will give it a slap to test its action and response. 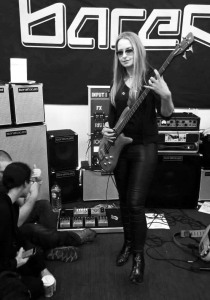 Another shocker was the Cog Effects Brutalist pedal (a clone of the Brassmaster), played through a Barefaced Audio amp it shook the very stall itself. Imagine an earthquake in a box, but with pleasant musical tones. Both pedals were very versatile, and although bassists don’t tend to use any/many pedals, with tools like this you can achieve the sound of several different instruments in one.

It was great to see Roger and Paul , who have both played guitar and bass in Zara. It’s interesting to observe a lecture theatre full of bassists; bassists are nice, they are always friendly and reliable. I got offered a seat and a sweet. One of my next blogposts will be about the character of guitarists  🙂     But I’ll leave you with some more images from London Bass Shows: 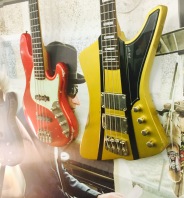 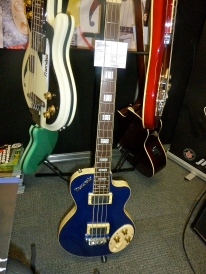 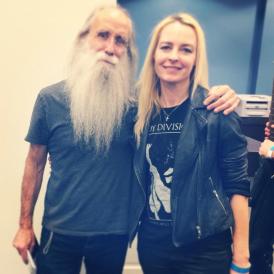